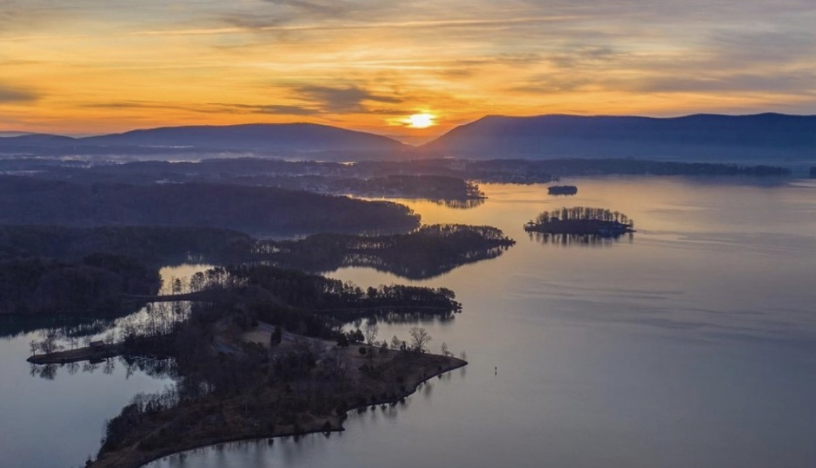 The first is sitting down with a good lake map and locating all the predominant shallow water areas leading off the river channel. These are going to be high percentage areas in Smith Mountain Lake holding Largemouth and Spotted Bass getting ready to move up and think about the spawn. They are coming off their wintertime pattern and setting up getting ready to go shallow and “do their thing”. The areas that appear on a map that are coming off the river channel and lead into a very shallow flat back in the creek or coves with main-lake and secondary points are going to be the first areas anglers want to practice in. Covering water and throwing baits that have an increased bite percentage is going to be very key when practicing on Smith Mountain Lake in the springtime. Again, the Largemouth Bass and Spotted Bass are looking to move up and spawn, so it is important for tournament bass anglers to eliminate the water that is not holding fish as quickly as possible. Anglers will often see a lot of fish cruising the banks or even locked up on the bed this time of year on Smith Mountain Lake. Baits that anglers should always be armed with that will get a lot of bites and can produce a lot of quality bites will be a swimbait and a wacky worm.

To start out with, anglers are going to want to throw a wacky worm or floating worm to pick off the very aggressive fish cruising up shallow, and it is a quick way to get an easy limit during the tournament. A wacky worm or a floating worm is nothing new that tournaments anglers have been fishing on Smith Mountain Lake. Again, this is a high percentage bait and can catch everything from small fish to big fish. There have even been tournaments on Smith Mountain Lake won from anglers throwing a wacky worm. A wacky worm consists of a Senko style bait rigged in the middle of the worm so that it has a dancing action when falling through the water column. Floating worms are a little bit different; this is often rigged as a Texas-Rig and is weedless. The key with a floating worm is a visible presentation. Bass are not necessarily locked in on the falling action of the bait. This is because the fish are relating up so shallow and the natural fall of the bait is already the perfect fall ratio that the bass are keyed in on.

Like Prostaff Angler Bryan New, you should never go without the Revital Outdoors Premium CBD Cream in your boat, or bag. Our 250mg CBD Cream is unscented and easy to pump and apply directly to the spot of inflammation or un-comfortability. Our cream goes beyond skin-deep to provide support while binding to your CB2 receptors within the body. Plus, it’s creamy and moisturizing so you can apply it after a long day of fishing as well. As anglers, we’re making 3,000+ casts per tournament day. Eventually, your shoulder, elbow, arms, and more will be affected by the routine motions over time. You’ll start to experience pain and inflammation and start to think about hanging up your rod. Revital Outdoors allows you to keep pursing your passions in comfort.